Hardware can only go so far…

So we’re in a weird state right now. The current generation of consoles is being “continued”. The PS4 Pro and the Xbox One S are not necessarily next-gen but rather a continuation of the current consoles. This is odd for a home console but not unheard of in the gaming industry. Both the 3DS and the regular DS have slightly more powerful versions in the form of the “New 3DS” and the “DSi”, respectively. One could argue the WiiU was an upgrade of the Wii. A new player has entered the battle, however, in the form of the Xbox Scorpio. Microsoft is calling the Xbox Scorpio A premium version of the current Xbox One. One that can (supposedly) run 4K 60fps.

I disagree with that sentiment. Microsoft is making a mistake by saying the Xbox Scorpio is just a premium version of the Xbox One instead of calling it what it is, a next-gen console. What was the difference between the Xbox 360 and the Xbox One? It was, at its core, a leap in power. As was the leap from the Xbox to the Xbox 360. As was the PS2 to the PS3 and so on. These iterations brought innovations such as the power of online play, but, when you break it down, these are the same boxes with stronger parts.

By dismissing the “next-gen” moniker, Microsoft is nullifying the Scorpio’s biggest advantage – the system’s power. Even associating it with the Xbox One name is a mistake. Though we don’t know the official name yet, Phil has said this system isn’t a replacement, but rather to exist alongside the Xbox One and Xbox One S. Also, the dev kit looks like an Xbox One, just smaller. So I have every reason to believe that the new name will be associated with the Xbox One family. Hopefully, when the full reveal is made at E3, that won’t be the case.

“The Most Powerful Console Ever”

If Microsoft does call it an Xbox One Next or something else with “One” in it, they are making it much harder for the general consumer to get on board with the console. Now, they have said they aren’t targeting the general customer, rather the “hardcore gamer”. I don’t believe them for a second. They didn’t invest this much into a powerful console so that only a small percentage of their userbase will take advantage of it. If you were targeting people who knew what they were talking about, you wouldn’t use the tagline “The Most Powerful Console Ever”. That just reeks of buzzword. No shit. Why would you release a console that’s less powerful than your previous one? (Unless you’re Nintendo, but they exist in their own plane of the universe) Also, this hardware is pointless if you don’t eventually take full advantage of it. Sooner rather than later, Microsoft will need to come out with games that aren’t held back by this previous hardware, or come out with another console before the power of the Scorpio is fully realized.

Microsoft is trying to hide this fact by saying every future game will be compatible with both the Scorpio and previous Xbox One systems. This is how the start of current-generation went. The difference? We knew right away that the old systems were on a timer. There were exclusive games even at launch. This “consumer-first” stance is, oddly enough, hurting the Scorpio’s chances. By ensuring that I can play all future games on my current Xbox, I can instead spend my money on a Switch or a PS4 or even a PC. 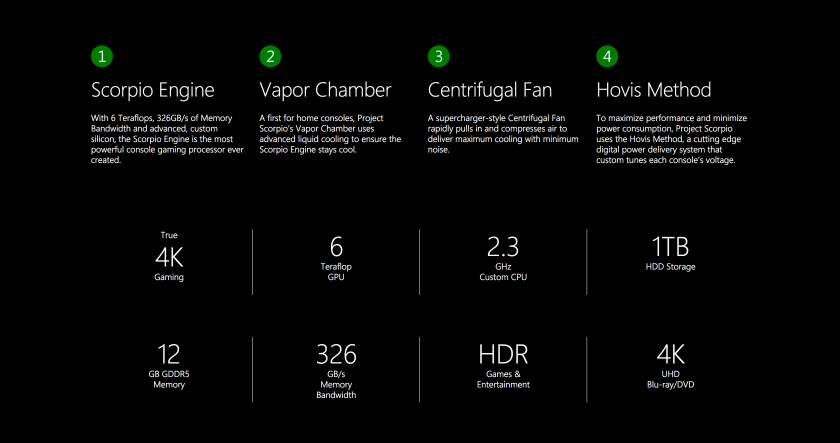 Even more so, Phil Spencer has said there are no real big surprises this year. In terms of exclusives, we will get some combination of Sea of Thieves, Crackdown 3, State of Decay, Forza 7, and the Phantom Dust remaster. Each game will probably end up fine, but none of these are system seller IPs. Sunset Overdrive and Quantum Break were both great, but they both sold pretty bad. Hell, even if Halo 6 or Gears 5 are announced at E3 they wouldn’t be coming for another year at minimum. Chances are high that most of these games will be available on PC as well, giving potential customers even less reason to pick up a Scorpio.

Xbox Project Scorpio – Not What We Needed

I worry that the Xbox division may be focusing too much on hardware since that’s how the PS4 pulled ahead at the start of this gen, among other smaller reasons. Sony has now delivered on the games front with Horizon: Zero Dawn, Persona 5, Yakuza 0, and Nioh. They have even more coming like the Crash Bandicoot remaster, Insomniac’s Spider-Man game, Uncharted: The Lost Legacy, and Ni No Kuni II to name a few.

Where are the games, Xbox? Power, while important, isn’t everything. If it was, PC would be the most popular platform. I would happier with a new console if I had reason to own the old one. I’ve seen those in defense of the Scorpio say “It’ll be the best place to play multiplatform games”. Two things wrong with that statement:

$400 would be a good price point, and that power will convince a new gamer to pick up the Scorpio over a PS4 Pro. Even with the $50 price drop the Pro is likely to get this holiday season. As far as getting Playstation players to jump over to the Scorpio, that is much less likely. They already have their friends and the games they play. They aren’t going to pick up the Scorpio for multiplatforms. These gamers will be easier convinced if the Scorpio is an exclusive machine.

Take me for example. I only have an Xbox One and a PC. Most of my friends game on Xbox. Due to all of the games that came out on the PS4 this year, I am going to grab one without question, but I’m going to keep getting my multi platforms on my Xbox. I am in the minority, however, with most people being in the opposite situation, and I’m still unlikely to get a Scorpio.

It Can Still Work… If Done Right

When discussing this with my roommate, he brought up an interesting point. He suggested that Microsoft may introduce a peripheral to push the Scorpio. Maybe something to do with Hololens or possibly VR. Try to push hardware with hardware. This isn’t that unlikely, as they did this with the Kinect at the start of the Xbox One. Hopefully, they’ll plan their presentation out better if this turns out to be the case, though I don’t think it would save the console.

Microsoft’s best step would have been to come out with some killer software before focusing on a new console. We’re past that, however, so their next best step is to release this thing at an affordable price. Even if it’s at a loss, because they don’t have the software to support it right now. At E3 they can announce a great lineup that would release over the next few years. Give people games to look forward to. Give us a reason to get the Scorpio. Push it like the next-gen system it is, and maybe, just maybe, it will be a success.

What are your thoughts on the Xbox Scorpio? Let me know down in the comments. Don’t forget to check out the rest of the site, or maybe some of my other projects.