The idea behind DAV is one of massive proportion. With DAV, there will be a massive open-source hub network for self-driving vehicles of all kinds to communicate and work with one another.

This is the sort of thing that can only exist with blockchain technology, though there are a lot of external factors that the team must consider. Third-parties may need to play a big part in investment due to the slow growth of the autonomous vehicle industry. Should the industry grow, chances are high this project will see great success. Let’s break into the ICO and see if it’s worth your time and money.

Name of the ICO: DAV

DAV wants to benefit the world of autonomous vehicles. Cars, drones, ships, and more will all be connected into one open-source peer-to-peer network and can transact, discover, and communicate with one another.

With this technology, the transportation industry will be forever changed. Travel expenses would be cut, and customers would save money overall. No longer would users need to own their vehicles. Instead, they would rent them on a case-by-case basis.

Ideally, the DAV network would be used by all self-driving vehicles. Ships, land vehicles, aircraft, drones, and more. The hub would give consumers access to all of these via the hub, and owners of these autonomous vehicles could rent them out to the service rather than to individual consumers.

The blockchain would allow a decentralized network with transparency, security, and monetization at the forefront. It would be open-source as well, ensures community development via the provided SDK’s.

The DAV team is made up of over 16 software developers, each from backgrounds like cryptocurrency, mobile and web apps, encryption, autonomous vehicles, artificial intelligence, and more. Also, there are 8 advisors, each of which come from places like NASA, GM, Ethereum, Equinix, and more.

Skill diversity is this team’s strong suit, with multiple members coming from a variety of backgrounds combining to solve problems from a wide variety of angles.

How Does The Token Work?

DAV Coin is a utility token. It is used to pay for a service, or rewarded for providing a service. Users can earn DAV by renting out their autonomous vehicle, a charger or docking bay for the device, or by providing support for insurance or repairs to the device. Otherwise, users spend DAV to rent the vehicles for transportation.

Eventually, the team imagines that users may not always be human. Instead, smart machines would rent the vehicles themselves to finish jobs.

How Will The Investor Make Money?

Without question, this will be a long-term investment. Investors should not go into DAV network expecting a quick return. Autonomous vehicles are still young, but DAV is one of the only ICO’s targeting this industry. Investors will grow the network’s infrastructure and will earn back their investment by supporting autonomous vehicles as a whole. 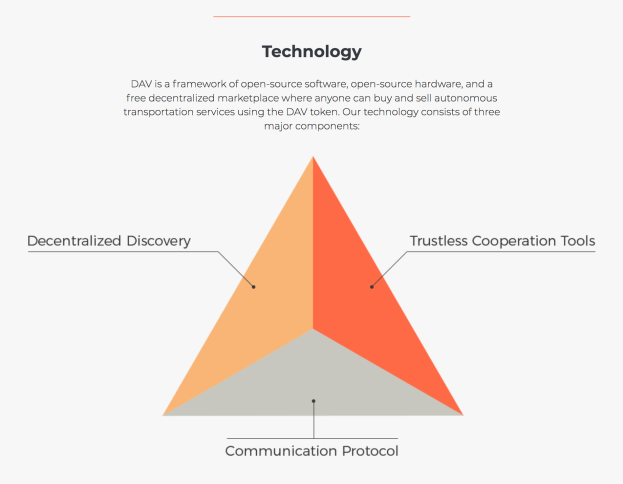 However, the team is only asking for $38 million in its ICO. Costs over the next few years could grow further past this, and the company will need support from corporate partnerships and other sources of revenue. That said, businesses like Uber, FedEx, and other transportation services could benefit greatly from the success of DAV coin so it may be in their best interest to invest.

Also, popular coin IOTA is focusing on smart technology as a whole. It isn’t nearly as focused as DAV, but the project is already working towards autonomous vehicles.

Overall, DAV is a bold project with the ability to provide real innovation in the world of self-driving vehicles. They have a strong team with lots of experience, and they can help push people towards their vision of the future. However, autonomous vehicles are still a long way off, and DAV will need a lot of support to get their project along. If they can convince third parties to invest, they very well may have a shot at revolutionizing vehicles as we know them.

Autonomous vehicles are likely to be a big part in the future of our transportation industry. This evolving technology is a prime target for blockchain startups, and the DAV project is approaching it from a unique angle. As long as the industry cooperates (and a bigger token like IOTA doesn’t steal the thunder,) we very well may see a big success in DAV.