The digital advertising space isn’t exactly running smoothly. Publishers are consistently looking for new ways to spam ads in the user’s face, while those users are resorting to ad-block to prevent this. It creates a vicious cycle that ends up with publishers making less money than they deserve, and advertisers controlling the market as a whole. The team behind Basic Attention Token have a possible solution.

What Is Basic Attention Token & How Does It Work?

Basic Attention Token is a new way to look at the world of digital advertising. Called BAT for short, the goal is to put the users in control of the type and the number of ads they receive when browsing the web. This is done through an incredibly quick blockchain based web browser called Brave, which links directly with BAT tokens.

Also, this allows content creators such as YouTubers to directly gain revenue from users, should they choose to contribute.

Basic Attention Tokens serve no purpose outside of the BAT platform, which can only be accessed via the Brave browser currently. That said, they are still being traded on exchanges, despite the team’s wishes against this. These tokens are intended purely for services on the BAT platform.

In 2017, the BAT wallet was integrated into the Brave browser. The team incorporated Bitcoin to BAT conversions and developed a Brave-specific ledger and wallet. Machine learning was then included, the team using it for targeting advertisements. Finally, the browser was given a metric tracking system and a method for measuring transactions.

More machine learning is incorporated, used for anti-fraud purposes. A BAT growth pool was added for new users. Previous machine learning was optimized, and dashboard analytics were provided to publishers that chose to opt-in early. A user-centric closed beta happened alongside some advertisement trials.

Ad revenue will begin to scale with user growth, furthering BAT value. Work put in to move the centralized Brave ledger to an anonymous Ethereum network. More options provided based on previous attention models, and increased dashboard information for publishers and advertisers. This should help with measuring ad performance, optimization, and for planning ad campaigns. The team also plans to allow BAT integration on other applications via their open source code.

They have a lot of work ahead of them, and the success of BAT’s rely a lot on the good-naturedness of users and their willingness to contribute to the websites they visit often. Ideally, opening BATs up to other platforms will provide more chance of this happening, as well as further acceptance from publishers and advertisers.

The two founders have extensive knowledge of online applications. Brendan Eich is a co-founder of the Firefox web browser, and the company that runs it, Mozilla, which was founded in 1998. Brian Bondy is another Mozilla employee who also has experience at Evernote and Khan Academy. Fortunately, both members have extensive experience launching and maintaining a web browser, ensuring faith in the Brave project. 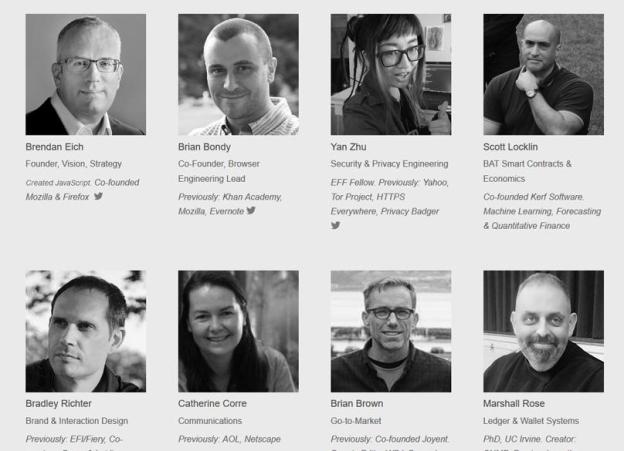 The team behind BAT are constantly heading to conventions and discussing the Brave browser, frequently tweeting out their updates and responding to blog posts and users conversing with them on the platform.

The BAT subreddit is incredibly active as well, with multiple members of the BAT and Brave team serving as moderators on the platform.

As mentioned, the team behind BATs don’t want their coin listed on exchanges, as it isn’t meant to represent value in that way. However, the token is still listed on quite a few, with Binance and Bittrex among the most popular.

Generally, it is expected that users buy BAT directly through Brave’s wallet via Bitcoin, Ethereum, Litecoin, or eventually credit and debit cards.

BAT can be stored in Brave’s wallet, which comes with the browser. This way, BATs can only be used in the BAT platform as intended.

Brave and BAT are a bold project looking to reinvent the way the world of digital advertising works. That said, they are relying a lot on the good of human nature here. Publishers may be hesitant to adopt this new format, as they aren’t guaranteed revenue like they are with annoying advertisements. Users also have to switch to a new browser, which not a lot of people are willing to do.