Blockchain-as-a-Service is a unique and evolving idea that makes the arduous task of building a blockchain much simpler for teams of developers. Ardor is yet another one of these projects, but with a few extra pieces of the foundation that make it stand apart from others of its kind.

What Is Ardor (ARDR) & How Does It Work?

Ardor is an open-source “blockchain-as-a-service” that connects with the Nxt blockchain platform. Nxt works as an asset trading exchange, a cloud for storing data, and offers voting/monetary opportunities. On top of this, it provides a creation kit for clients to create their own blockchain for usage on the Nxt platform.

The Ardor project is the next step. While similar to Nxt, Ardor fixes the standard issues with the blockchain, namely scalability, by separating security coins from standard transactions. The two networks are paired together into a parent/child architecture.

Ardor has a main chain that powers all of the child chains. This main chain processes child transactions by placing them into blocks, as well as distributes the ARDR token across accounts.

Child chains are created by clients, which is where the blockchain-as-a-service part comes in. These child chains can use the ARDR token or any token the client prefers. One set up, the child chain can trade and communicate with any other chain on the network. Teams can pick and choose which features their chain has, allowing them to use it for polls, trading assets, sending messages, and more.

The merging of child and main chains is called bundling. Bundling allows Ardor to keep its chains working together and allowing them to transact with one another, while still allowing for them to act separately as their own entities.

With ARDR, all coins are already in existence. Ardor works on a proof-of-stake consensus algorithm. By staking the coin, users are holding their place in a child chain, and using extra coins to provide their chain with different features. ARDR is also used to pay for transaction fees on the network. Because all child chains are connected to the main chain, all ARDR goes through to the main chain.

This also factors into the governance system, where teams with the most staked have more say in the future of Ardor. That means all of the coins have already been “mined,” so mining does not exist on the platform. Instead, stakers are rewarded with more ARDR based on the amount they initially invested, alongside providing services to the network.

Currently, there isn’t a whole lot on the Ardor roadmap. Right now, they are working on sharing data between child chains, launching more child chains on the main network, and merging features to the project that don’t necessarily rely on the child/parent relationship of the child and main chains.

After this, the Ardor team will be implementing more transaction types and fixing a few of the main net issues that plague the network.

Eventually, the team also wants to work on a decentralized exchange that will allow currency trading between the child chains.

Ardor and Nxt are owned and developed by a company called Jelurida B.V. This business is run by developer Lior Jaffe, who has been programming since he was 13 years of age. Another co-founder and developer is Petko Petkov, who has degrees in Informatics and Electronic Government. On top of this, Petkov has coded in multiple languages ranging from Java, Python, and C++. 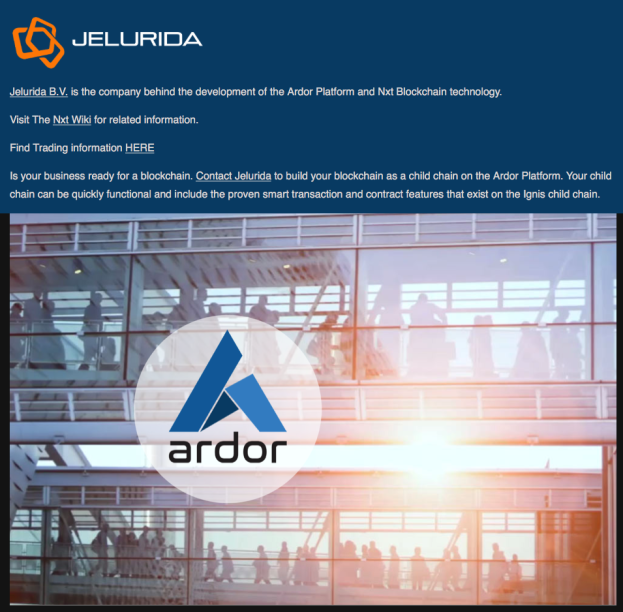 Overall, the Ardor team publishes multiple posts relevant to their project on Twitter and does a little communicating with their audience. Otherwise, most information is posted on Reddit and discussed by a decent sized group of people.

Ardor is only available on a few exchanges. Bittrex, HitBTC, Poloniex, and UpBit remain the biggest. However, it is another one of those coins that may take off this year, so we may possibly see it on other exchanges like Kraken or Binance as time goes on.

ARDR can be stored in the Nxt wallet, as it is currently an Nxt technology until the final launch of the mainchain.

The appeal for multiple industries is vast, with the potential for teams to utilize the blockchain to further their businesses and ideas. However, Ardor is only one of many blockchain-as-a-service projects. That said, it has the Nxt network to help push things along – a big win in terms of competition. In fact, the Nxt network has never gone down since its implementation back in 2013. Also, Nxt supports Java and is even open-source.

Nxt has been around for years, and a lot of issues around it have been ironed out. Because of this, Ardor may be put at an advantage that other BaaS technologies simply do not have. We’ll have to wait and see.